Driver's licenses which permit driving of automobiles in Japan are as follows. 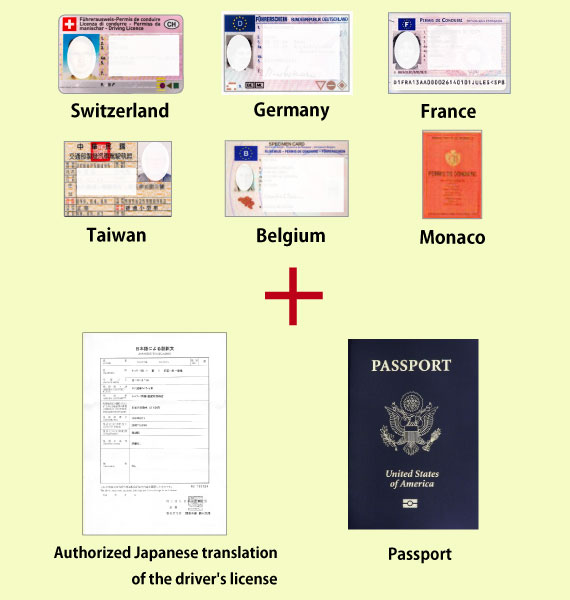 Foreign driver's license of a target country and the local (five countries and Taiwan of the Swiss Confederation, the Federal Republic of Germany, the French Republic, the Kingdom of Belgium, the Principality of Monaco) publication

In Geneva Convention (1949) contracting parties, it is an international driver's license of the publication (except Japan)

* The simultaneous presentation of the passport is necessary.
* The driving in the international driver's license acquired at Paris Convention (1926), Washington Convention (1943), Vienna Convention (1968) member nation is not accepted in Japan.
* expiration of international driver's license is within a year from publication(confirmation necessary ) and expiration of driver's license of Japan is within a year date from landing to Japan (confirmation by a seal of landing date to Japan of passport)
* But date of re-entry can't be the date of landing(expiration reckon in Japan) when one recorded by Japanese Basic Resident Register enters again within a period less than three month * The effectiveness to let you drive in Japan is effective (you must confirm an issue date) for one year from an issue date. It is confirmed by an entry stamp, and indicates an entry date to Japan (from a year in passport)

However, the person who leave Japan within under three months; re-input country Basic Resident Register afterwards operate qualification in Japan (it is not necessary considered to be the starting date).

If the documents like the contractor are not prepared, all one cannot run.

When there is documents deficiency, we cannot loan by any reason.

In that case, please be careful enough because there is the case that a cancellation rate according to agreement produces.